The days are getting darker and colder as Christmas is draws closer and closer. While the weather continues to look more like Christmas cards, this week brought us two more mince pies. The highly rated ‘Luxury’ mince pie from frozen food supermarket Iceland and a homemade attempt by yours truly. 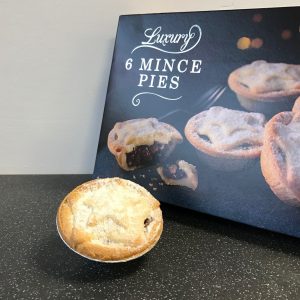 Iceland have built up quite the reputation for having a really good mince pie so we had to test it out. At first glance, it looks the real deal. Boasting a double star topped pastry with small enough gaps to just about see the mincemeat residing inside.  These have also had a pleasant sprinkling of icing sugar on top – just enough to cover the colour of the pastry but not enough to become over powering.   7.5/10

The pastry of these pies was good. Not great compared to the likes of Sainsbury’s or Waitrose where they had a shortbread taste to them, however, still very pleasant. Easy to eat and with very minimal crumbs. 7.5/10

The filling for these bumped up the scores to above average. The mincemeat was exceedingly good considering the price of the pies. It’s easy to refer to these pies as premium with a budget price tag. The consistency was just right and fruit was plentiful. Had these pies been consumed the week before M&S and Waitrose, a higher score may have awarded, but still a good score for a good mince pie. 8/10 for the filling giving Iceland a taste score of 15.5/20 and an overall score of 23/30.

This week felt like the right time to have a go at making some homemade mince pies. I grabbed some products from our warehouse, popped in a supermarket go get some ingredients and headed for the kitchen.

The first thing to do was to measure out the ingredients for the pastry. 12oz (350g) of plain flour, 6oz (150g) butter, a pinch of salt and a smattering of sugar. I also used a jar of amaretto mincemeat from Waitrose because I didn’t have time to make my own. 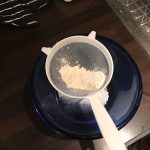 The next step was to sift the flour into a mixing bowl followed by the butter, salt and sugar.

Delia Smith says to use half lard and half butter, however, I chose to use just butter.

Then rub the butter into the mixture until it looks like breadcrumbs.

Slowly add water-a tablespoon at a time-and mix the ‘breadcrumbs’ into a dough.  This should leave the bowl clean, well relatively. Take the ball of dough and pop it in a bag. I used a sandwich bag because that’s what I already had in one of the kitchen drawers. Then leave it to rest in the fridge for 20-30 minutes.

During this time, I took advantage of the vacant television and watched some of the football but you can watch any other programme.

The next step was to cut this ball in half and roll it out as thinly as possible. I did this using our Cater For You wooden rolling pin.  This bit was very easy. Make sure there is some flour sprinkle on the work top first otherwise the pastry will stick to it. 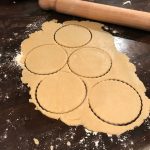 Then, using Cater For You crinkled cutters, cut out the pies in the pastry.  I used the largest one for pies and the smaller one for the pie tops.

Next, I took the circles of pastry and placed them in our Cater For You deep fill mince pie foils 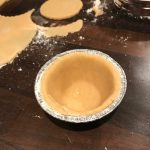 .  These are deep.  Really deep!  So deep I had to stretch the pastry to ensure it reached the top of the foil.  This can only mean one thing – more room for mincemeat! 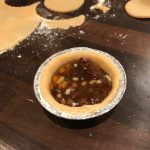 I had the option when purchasing the mincemeat – standard, brandy or amaretto.  As I have quite a sweet tooth, I chose the amaretto and upon opening the jar, it was a choice I knew I would not regret.

I loaded the pie up and added the lid.  To let the pie breathe while in the oven I pierced a few holes in the top using a fork.

It is at this stage that usually some milk or egg yolk is brushed over the top, however, I skipped this part as the last of the milk was used for a cup of tea earlier in the evening and the eggs failed the floating test meaning they probably went bad a while ago.  Better preparation will be enforced next time.

I made six deep fill mince pies and sat them in a Cater For You silicone 6 cup muffin tray.  These were great as they’re quick at cooling down as easy to clean. 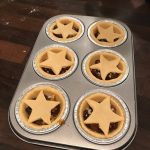 .  These are the same size as deep fill pies and cakes by Mr. Kipling amongst others.  For these pies, however, I used a star cutter to make a lid.  This allowed the pie to show off its mincemeat residing below.  Plus, these look quite festive. I popped both trays in the oven for 25 minutes until they were golden brown.  To pass the time, I washed up the mixing bowl and other bits and pieces used. And by washed up, I of course mean, put in the dishwasher.

In no time, the buzzer was going off alerting me 25 minutes had passed so I took the mince pies out of the oven. And inhaled the wonderful aroma as sweet smelling wall of heat hit me. 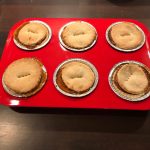 It was at this point I immediately wished I had used the milk/egg yolk to secure the lid as
the mincemeat had tried to escape during the cooking process. This was nothing a sprinkle of icing sugar couldn’t hide, though. 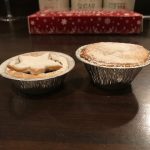 Here are both the mince pies after their icing sugar shower.  As you can see, the depths of the two pies are quite different.

The final steps of this whole mince pie making experience is to box them up.  I used two of our boxes – a cardboard windowed snowflake version and a 6 cavity plastic mince pie box. 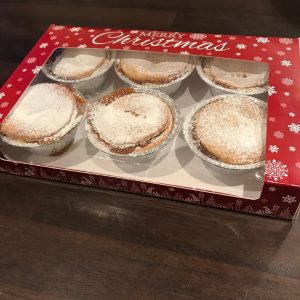 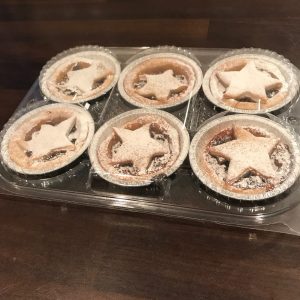 As always, the initial mark goes on looks and the first one taken off the table was the plain lid pie. They look big. Bigger than all the previous pies in this review. The dusting of icing sugar and the escaping mincemeat added to the homemade look and as such, gave it a bit of character, however, a score higher than 6/10 could not be awarded as they are quite messy.

Next was the pastry.  Honestly, it was quite dry and as such, had a bit of a crunch to it.  It didn’t taste bad, however, this could only achieve a 6.5/10. Not a bad score for a first attempt at pastry – just means the next batch should be better as there is room for improvement.

Now the mincemeat on the other hand was fantastic. Straight 9/10 from all in the office.  The amaretto gave it a sweet taste along with a lovely aroma as well as being packed full of fruit.  The best filling of all the pies tested this festive season so far.  If you’re planning on making your own mince pies, we highly recommend Waitrose Christmas Amaretto Mincemeat. 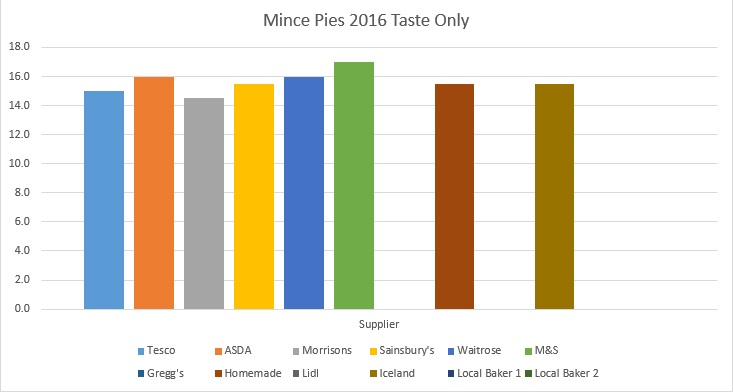 Next week, we’ll try out what budget supermarket Lidl have to offer as well as testing Greggs the bakers mince pies.