The English Breakfast truly is a thing of beauty. We decided to make an English Breakfast Cupcake, mainly because we could if I’m being honest. I’m Kate; if you’ve ever called us and spoken to a female voice, well, that’s me. (Being the only lady answering the phone, it can’t be anyone else)

I decided to volunteer for this task as a) I love an English Breakfast, b) I’m convinced this cupcake is better with Baked Beans in it, and c) I get to road-test one of our silicone cupcake moulds too. Perfect. Here’s how to earn some brownie points (don’t ask why, you just will) 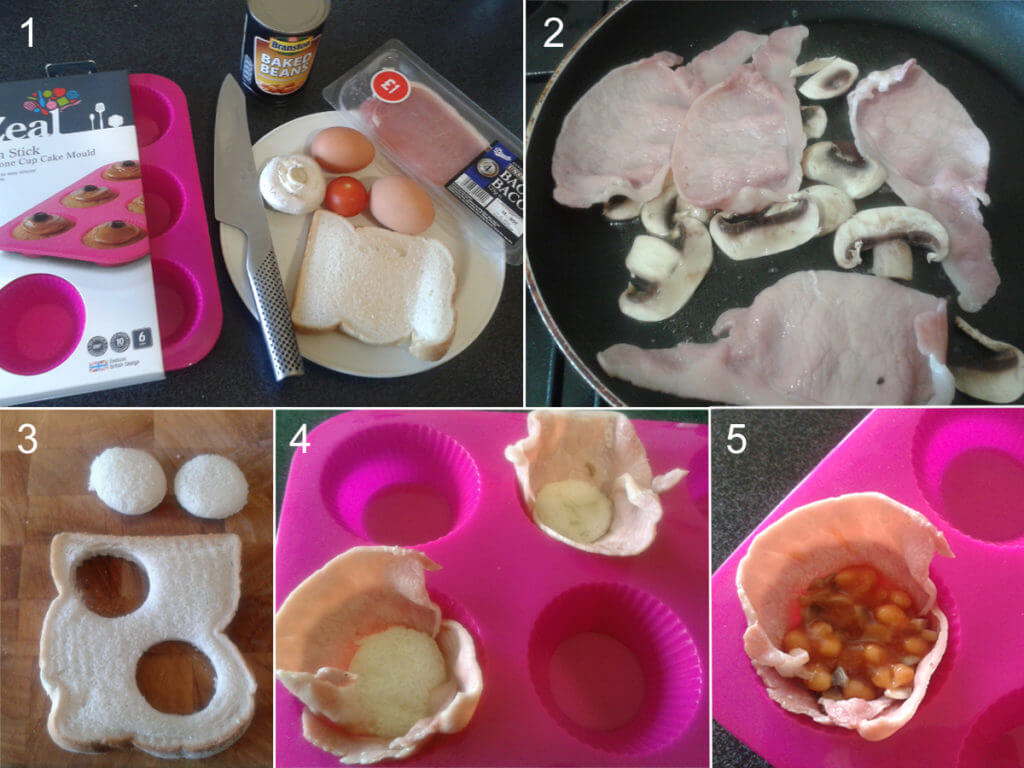 2. Pre-heat your oven to 190 deg C, or Gas Mark 5/6. Lightly fry your bacon and mushrooms,until it’s just cooked, then leave them to drain on a piece of kitchen towel.

3. Cut 2 round circles out of that slice of bread and put them in the bottom of your cupcake mould. (I used a deodorant lid as it was the perfect size)

4. Line the moulds with the bacon as best you can. The main aim is to prevent the egg/beans/mushrooms from leaking.

5. Chop your cooked mushrooms up and add a spoonful, followed by some baked beans. Don’t be tempted to overfill, you’ve still got to get that egg in there.

6. Carefully crack your egg into the cupcake. I broke mine into a small bowl first – the last thing you want at this stage is a broken yolk. You see my bowl? That’s a double yolker! When was the last time anyone saw one of those? Seeing as I added beans, there wasn’t enough space for both of them (gutted) so I separated them – easiest done through your fingers. Yes, I know its gross.

Add a crack of sat n pepper (and cheese if you’re that way inclined) and pop them on the middle shelf of the oven. Make tea. Wait 20 minutes or so, until the white has set.

And there you go, 1 English Breakfast Cupcake with a runny yolk. Lovely! Kate